BOOK SUMMARY: “DANCEFLOOR THUNDERSTORM: Land Of The Free, Home Of The Rave”

In the 1990s, an incredible revolution swept across North American dance floors—an underground revolution called the rave scene, where thousands of electronic music fans gathered together at secret events, and partied well into the morning to the most progressive, cutting edge beats on the planet.  It was outrageous, controversial, and a pivotal moment in American pop culture.

DANCEFLOOR THUNDERSTORM: Land Of The Free, Home Of The Rave is the new book that shows the American rave scene at its peak, written by one of the ultimate rave insiders—dance music photojournalist Michael Tullberg.  Photographing and writing for most of the major electronic music magazines of the day, including URB, Mixer, BPM Culture and Insider, Tullberg captured the rave scene in all its visually spectacular glory like none other.  Reporting from the center of American rave culture, he amassed an enormous library of photographs, articles, interviews and memorabilia, the best of which make up the contents of the book.
With hundreds of his tripped-out, psychedelic images and insightful words, DANCEFLOOR THUNDERSTORM takes the reader back on a blissful trip into the innermost heart of the rave scene—to the warehouses, after-hours clubs, deserts and mountains where rhythmic magic was made.  It delivers VIP, backstage and on-stage access to some of the most groundbreaking electronic music artists in the world, and pulls back the curtain on the early days of classic festivals like Electric Daisy Carnival and Nocturnal Wonderland.  More than just a snapshot in time, DANCEFLOOR THUNDERSTORM is a tribute to the men and women who catapulted electronic music into the public eye, and who laid the groundwork for the dance-dominated pop and EDM that tops today’s charts.

Here’s what the media has been saying about DANCEFLOOR THUNDERSTORM!

“Light refracts, piercing images like those moments when your eyes have been open for far too long. Scenes morph into vortices that blur at the edges, like your memories will the next day. In Tullberg’s photos, faces melt and hands multiply. They are photos that make you feel like you are in this moment that you hope will never end.” LA Weekly

“Tullberg’s collection captures the spirit of the American ’90s rave scene in a way that transcends location. Perhaps it’s because his original style of using long-exposures to capture the kinetic energy of endless hours on darkened dance floors illuminated the scene before the introduction of the epic crane shot. Or maybe it’s the fact that the look of Los Angeles rave kids was, by the late ’90s, the de facto dress code for party people across the country. It’s the same broad cultural influence that made LA’s festival scene the genesis of today’s EDM explosion.” Thump (Vice)

“If you are an old-schooler looking to reminisce or even a newbie simply looking for a great visual history of your culture, this book is a must have.” Magnetic Magazine

“Michael Tullberg dove into California’s rave scene just as it was beginning to take shape in the 1990s, befriending many of the area’s major promoters and DJs. Beginning in 1996, he saw a shift as music moved from parties in clubs and warehouses to DIY experiments at the mountains, beaches, and deserts around L.A. These raves were popping up all over the country, but the epicenter of the new culture—which had its own unique sound and fashion—was in Southern California.” Slate

“Photographer Michael Tullberg shot hundreds of images for URB and other magazines at the height of LA’s 90s rave scene. From raves on the Venice boardwalk and downtown’s Alexandria Hotel, to the National Orange Show in San Bernardino and the desert raves all the way to Indio, no collection of photos from this magical time and place have ever been assembled before.” Urb.com

“Every subculture includes a handful of tech-friendly souls who function as their movement’s de facto historians. Reviewing and shooting festivals like Electric Daisy Carnival and Nocturnal Wonderland for outlets like URB and Mixer, Tullberg amassed a collection of thoughts and images that chronicle Southern California’s rave scene from 1996-2002, one of its more pivotal eras.” Vibe.com

“Without Michael Tullberg, we may not have such detailed accounts and photos to look back on. Dancefloor Thunderstorm will act as a comprehensive guide to one of the most dynamic times in dance music, and can be enjoyed by ravers, old and new… the work he has done is an essential piece in the history of dance music – not just for California, or even the United States, but for the world. Through his artistic documentation of the rave moment, he showed that the power of electronic music could have a profound impact on the music community, and no one would argue that considering that dance music has become the dominant sound on a global scale today.” 6AM Group 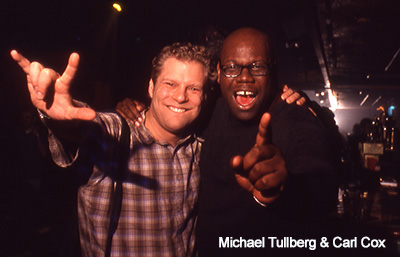 All these dj’s and artists appear in the book

Land Of The Free, Home Of The Rave